At the end of May, the Department of Health and Human Services (HHS) released a proposed rule to revise regulations previously released under Section 1557 of the Affordable Care Act (ACA). The HHS goal with the proposed rule is to remove what the department views as redundancies and inconsistencies with other laws, as well as reduce confusion.

Under current rules, “covered entities” include employers with respect to their own employee health benefit programs if the employer is principally engaged in providing or administering health programs or activities (i.e., hospitals, physician practices, etc.), or the employer receives federal funds to fund the employer’s health benefit program. Group health plans themselves are subject to the rule if they receive federal funds from HHS (e.g., Medicare Part D Subsidies, Medicare Advantage). In other words, employers who aren’t principally engaged in providing health care or health coverage generally aren’t subject to these rules directly unless they sponsor an employee health benefit program that receives federal funding through HHS, such as a retiree medical plan that participates in the Medicare Part D retiree drug subsidy program.

The most prominent proposed change is to the provision in Section 1557 which provides protections against discrimination on the basis of race, color, national origin, sex, age, and disability in certain health programs or activities. HHS’ proposed regulation would revise the definition of discrimination “on the basis of sex” that currently includes termination of pregnancy, sex stereotyping, and gender identity. The proposed rule, if finalized, would remove gender identity, stereotyping, and pregnancy termination as protected categories under Section 1557—though they will remain protected under other civil rights laws and regulations.

Certain compliance requirements on covered entities will also change, including the narrowing the scope of who Section 1557 regulates. Entities not principally engaged in healthcare will be subject to Section 1557 only to the extent they are funded by HHS. Entities whose primary business is providing healthcare will also be regulated if they receive federal financial assistance. A “health program or activity” specifically would not include employee benefit programs, including short-term plans and self-funded ERISA plans as long as they do not receive funding from HHS. The proposed rule also regulates insurance carriers only with respect to products for which the carrier receives federal financial assistance; the current rule regulates all products if the carrier received federal funding for at least one product.

Additionally, more flexible standards concerning individuals with limited English proficiency are proposed, including revising the “tagline” requirement. The tagline requirement requires distributing certain notices in 15 different languages in every “significant” publication associated with a health plan (anything larger than a brochure or postcard). HHS views this requirement as being too costly without data to back up that the taglines are beneficial. If the proposed rule is finalized, the tagline requirement will be eliminated.

Although there are provisions and definitions that will be changed or eliminated, parts of Section 1557 will remain intact. Likewise, HHS expects other agencies and departments to oversee and enforce nondiscrimination laws that will no longer be under HHS purview.

Until the proposed rule is finalized, employers who are covered entities (or whose plans are covered entities) should continue to treat termination of pregnancy, sex stereotyping, and gender identity as protected categories in relation to health programs and activities. Likewise, all other areas of Section 1557 should continue to be followed, including who is regulated and the tagline requirement. States and localities may give greater protections so it is important to keep in mind that there may be further requirements under those local laws and regulations.

In Rev. Proc. 2019-25, the IRS released the inflation adjusted amounts for 2020 relevant to HSAs and high deductible health plans (HDHPs). The table below summarizes those adjustments and other applicable limits. 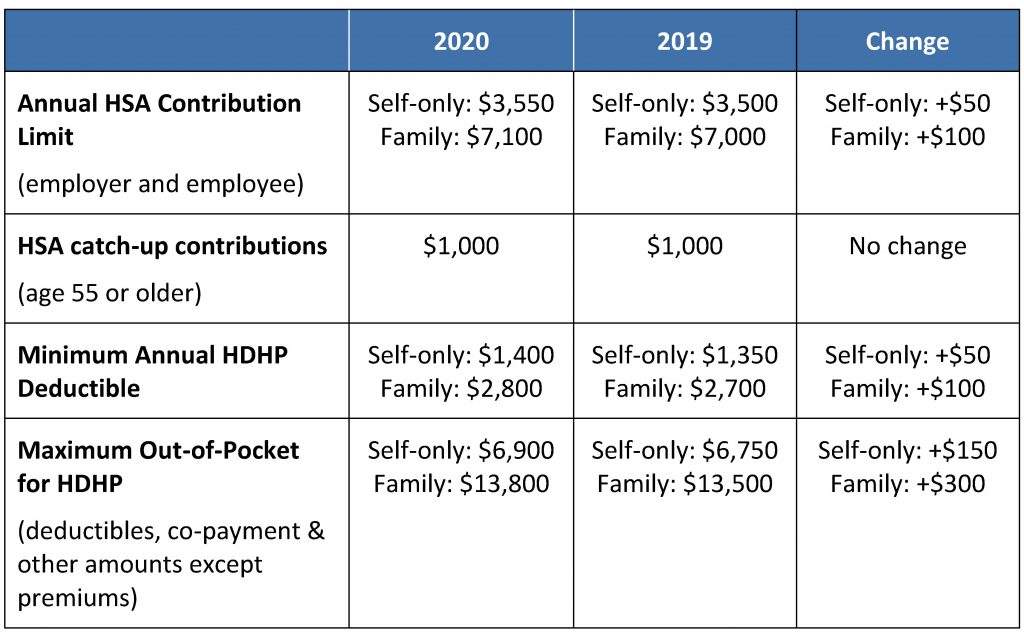 The ACA’s out-of-pocket limits for in-network essential health benefits have also been announced and have increased for 2020.

Next Steps for Employers

As employers prepare for the 2020 plan year, they should keep in mind the following rules and ensure that any plan materials and participant communications reflect the new limits:

Employers that sponsor self-insured group health plans, including health reimbursement arrangements (HRAs) should keep in mind the upcoming July 31, 2019 deadline for paying fees that fund the Patient-Centered Outcomes Research Institute (PCORI). As background, the PCORI was established as part of the Affordable Care Act (ACA) to conduct research to evaluate the effectiveness of medical treatments, procedures and strategies that treat, manage, diagnose or prevent illness or injury. Under the ACA, most employer sponsors and insurers will be required to pay PCORI fees until 2019 (the fee does not apply to plan years ending on or after October 1, 2019). For employers with calendar year plans, this July’s payment will be their final PCORI filing.

The amount of PCORI fees due by employer sponsors and insurers is based upon the number of covered lives under each “applicable self-insured health plan” and “specified health insurance policy” (as defined by regulations) and the plan or policy year end date. This year, employers will pay the fee for plan years ending in 2018.

Employers that sponsor self-insured group health plans must report and pay PCORI fees using IRS Form 720, Quarterly Federal Excise Tax Return. If this is the employer’s last PCORI payment and they do not expect to owe excise taxes that are reportable on Form 720 in future quarters, they may check the “final return” box above Part I of Form 720.

Note that because the PCORI fee is assessed on the plan sponsor of a self-insured plan, it generally should not be included in the premium equivalent rate that is developed for self-insured plans if the plan includes employee contributions. However, an employer’s payment of PCORI fees is tax deductible as an ordinary and necessary business expense.

Historical Information for Prior Years

Plan sponsors may choose from three methods when determining the average number of lives covered by their plans.

Actual Count method. Plan sponsors may calculate the sum of the lives covered for each day in the plan year and then divide that sum by the number of days in the year.

On Thursday, May 23, 2019, the Senate Health Committee proposed a bipartisan bill called the Lower Health Care Costs Act. This bill sets out to address surprise medical billing, reduce the cost of prescription drugs and the overall cost of delivering health care, and improve transparency.

The proposed bill is the latest move federal officials have taken to address rising health care costs. Earlier this month, the Department of Health and Human Services (HHS) announced a rule that would require drug companies to disclose the price of prescription drugs on TV ads. In addition, President Donald Trump recently delivered a speech in which he laid out a blueprint for combating surprise medical billing.

The Senate Health Committee Chairman Sen. Lamar Alexander said that “Republicans and Democrats in the United States Senate have announced this proposal of nearly three dozen specific bipartisan provisions that will reduce the cost of what Americans pay for health care.”

Additionally, bill co-sponsor Sen. Patty Murray explained that the bill focuses on “important issues like surprise medical billing, drug prices, maternal mortality, and vaccine hesitancy,” and that the rare bipartisan effort demonstrates that “we can make progress when both sides are at the table ready to put patients and families first.”

Sen. Lamar Alexander hopes that the Lower Health Care Costs Act will be on the Senate floor for a vote by July of this year. To view the proposal, click here.

©2019 Marathas Barrow Weatherhead Lent LLP. All Rights Reserved.
©2019 Zywave, Inc. All rights reserved.
The information provided in this alert is not, is not intended to be, and shall not be construed to be, either the provision of legal advice or an offer to provide legal services, nor does it necessarily reflect the opinions of the HealthSure, our lawyers or our clients. This is not legal advice. No client-lawyer relationship between you and our lawyers is or may be created by your use of this information. Rather, the content is intended as a general overview of the subject matter covered. HealthSure and Marathas Barrow Weatherhead Lent LLP are not obligated to provide updates on the information presented herein. Those reading this alert are encouraged to seek direct counsel on legal questions.